Good Day Traders,
For those who’ve been reading the Art & Science Bi-Weeklies for a while, thank you! I try to keep the discussion going with a view of the Markets and individual stocks from a purely technical viewpoint, following great stock picking tools from IBD® fundamental analysis, and Active Trend Trading Action Points. We continue to expand what we offer our readers and sometimes experiment with various features that may or may not move into permanent offerings. That’s what we’re currently doing with our Market Stock Talk recordings on Friday afternoons. I’m also experimenting with 2-Minute Market Updates posted at both ActiveTrendTrading.com and my YouTube channel at Market Tech Talk. If this effort proves to be a great way of getting out the word on what I see going on in the market, and with potential trade set ups then I’ll continue the effort. Let me know what you think.

Please keep those great personal stories flowing, it is awesome to share in each other’s successes!

General Market Observation: Today’s price action in the Dow appeared to be stronger than the other indexes as it moved up on below average volume from yesterday’s doji spinning top at the 8 day EMA and 20 day SMA. Sellers came in at previous resistance, but price did finish near the top of today’s candle. The Uptrend continues to be Under Pressure, with the SPX, Nasdaq and Russell not showing the same move up as the Dow. All the indexes are currently moving sideways, range bound between support and resistance associated with past swing highs and swing lows. Distribution days on both the Nasdaq and SPX are still elevated at 8 & 5 respectively, but some of the leaders made an attempt to bounce today. While we have not completely slipped into Market in Correction, we’re watching to see if there is a change of character from what has been normal over the past couple of years. (This norm being corrections that have been short and shallow.) So, if we do slip into a more pronounced correction, will it again be short and shallow, or more intense, possibly indicating that the character of the aged Bull is changing and the Bears may be more forceful? As always—time will tell!

Outs & Ins: There was just one stock added to the Running List and that is AL. Currently AL is pulling back from recent highs like many of the other stocks on the list. As the indexes have continued to show a lack of motivation for going higher, high octane growth stocks have been seeing profit taking perhaps spurred on by sector rotation.

We have highlighted several stocks from Running List that have set up for nice downside trades like MA and NFLX over the past few days. So with the Uptrend Under Pressure, it make any long trade brings additional concern if the market does slip into a Correction. I’m going to watch for an acceleration of price action to the downside as one of the clues that this time the correction could be more significant that the short and shallow correction of the past couple of year. At times like this it’s a good idea to review ones watch list asking two questions—first which of the stocks on the list are breaking down harder than the markets (short candidates) and second which stocks are holding up better than the markets (long candidates with a positive reversal). On the falling stocks identify Action Points where buyers should come in (moving averages & support levels) and if the buyers fail to appear that provides clues to the severity of the current market condition.

A few stocks that might be worth watching to the downside include GMCR, VRX, WYNN or LVS on any low volume relief rally attempt. A few stocks holding up include THRM, ACT, SAVE & SYNA. Remember, the market direction impacts 60-70% of a stocks movement…so if you’re looking long move in with smaller positions!

Tech Talk: A quick look at a former leader that may be setting up for further downside movement, MasterCard (MA). Background: MA broke-out in October 2013 (Point A on the chart) at $70 and proceeded to run up approximately 21% over the next 3 months. On January 21st 2014, the stock split 10:1, which could be considered excessive. The sell-off started 2 days later, falling back to just above the original breakout level, then slashing through the 50 day SMA (Point B) on the way down. Over the next 44 days price action began to climb back towards the 50 day SMA in low volume (Area C). On 3-21 selling volume kicked in, taking the price back below the 50 day, where MA now appears to be primed to drop to lower levels of support at $72 or less (Area D). The pattern shown on the chart is a classic picture of rotation out of a stock. Notice how, after the first plunge below the 50 day, prices camped out below this significant moving average before it began turning over with a steepening downward slope. The potential failure of the brief break above the 50 day earlier last week was partially telegraphed to the observant trader because of the below average volume present with this breakout. Low volume breakout moves should always be considered as questionable, especially when the 50 day moving average is already sloping downward. 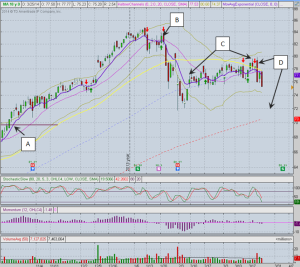 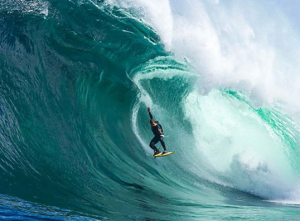 Off the Wall:  It seems that in life, there is always tension between what we want and what we need.  I think it’s probably a bit of both human nature and nurture with this never-ending challenge.  This tension affects much of our life, resulting in both good and bad decisions that then develop into the circumstance we currently find ourselves living out!  Look at any area of our lives that we tend to be dissatisfied with and most of the time we will find that the battle between what we want and what we need was won by what we wanted!  Relationships, habits, choices, personality traits—either healthy or detrimental–can be traced to whether they were based on what we wanted or what we needed.

This “want vs need” issue also regulates our pursuit of becoming a wise, disciplined and profitable trader.  We all want to be successful and make lots of money trading.  To want this as the result of our effort is OK. But are we willing to do what we need to do to achieve what we want?

Want-to-be traders stubbornly avoid this question.  But, we cannot ignore the question forever. Even if we never verbalize a, “no”, our trading actions and results answer for us.

For the disciplined trader, willing to fulfill the Needs for growth, trading becomes easier! This happens because they have written trading rules, they practice going through charts and back-testing their system, they understand that not every trade is a winning trade but that winning for the trader is following their rules and protecting their capital.  Most importantly, they do their stock research at the time they’ve assigned and renounce the urge to trade impulsively.  The trader who is willing to do what they need to do will realize that it takes discipline to be disciplined. They will be on alert when faced with a choice of “want vs need”.

Share Your Trades:  Many of you have sent me notes regarding the success you are having with the Active Trend Trading System.  Please send you stories to me at dww@activetrendtrading.com so I can share them with our fellow traders.  Plus, if you are considering a trade that appears to be at a proper Action Point, sent that alert also!  Thanks!